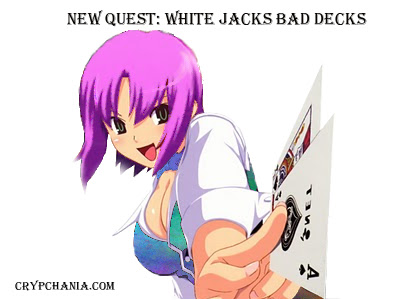 Here is another update from me. It’s been a while as always so I just want to write out to you how it is going. The game is running fine most of the part. As it seems my own PC / SERVER Connection can’t always keep up with the logged in users that are connected to it. So I think we are still in BETA?And I Should fix up a server from a hoster, which is still pretty expensive because the donations are not keeping up with the actual costs of maintaining.

I Have removed the windows installation file from the website because there are some bugs in it and It won’t allow me as a developer to update it every time there is a minor bug fixed. now I Just upload it to the node server and poof, the changes are there for the player to experience.

So Martin, do you have some happy news before summer starts?

Afcourse :- ) I made a new mini game driven Quest called White Jack mad decks. It’s a card game just like Black Jack ^_^. But there is some sort of history around this game in Crypchania. The inventor: Jack White, was a kid when he first came up with the game. After 15 years of holding tournaments, Naomi pop-ups all of a sudden. She and Jack White has some history with each other…
So bring in all your SQUARES and let’s join another Quest across the world of Crypchania, to find the White Jack Masters, which are the tournament winners. If you win enough from them, they will give you a White Jack Batch. Because the tournament is held for 15 years long, there are 15 White Jack Batches to return to jack. So I hope you all have fun with this Quest which is available further away in the game, when you follow the main story.

And now some more techie stuff perhaps- Never mind this time, it all goes well and I’m still figuring out a way to integrate the block chain inside crypchania. Making the SQUARES, real life tokens to pay and play inside the game, and maybe as a paymentgateway for the webstore… merchandise, posters, Walkthrough, which comes way later I guess.
So there is still a lot of work to do, before it is at the level I want it to be… maybe it will take a few years before its final product. But no problem I have the time.